Hello. After polling the Rainbows, it seems that Wednesdays remain the best alternative for our Unit Meetings. Here are important dates for you to diarise in 2009.

Whatever you do... don’t expect to receive orders quickly.

Sometimes we are spoiled with a speedy delivery and then we start to expect to get the same delivery speed all the time. But it takes time to pick orders, time to box them, time to get them to Australia Post, and time for Australia Post to dispatch them to couriers.
We all need to expect a 10 business day delivery time and be happily surprised when the products are delivered faster. If you set expectations (yours and your clients) for the norm, everyone will be delighted when we beat their expectations.

Hi. You might have heard Angela and me say something about not sorting socks and jocks. That's a little saying we heard from Janelle and it's all about not spending time getting ready to do something... just do it!

Personally, I love Yoda's insight: Do or do not, there is no try. I've taken "try" out of my vocabulary.

In Seth Godin's Blog (the one I can't help but read everyday) I just read another saying with exactly the same sentiment:

Getting your ducks in a row is not nearly as powerful as actually doing something with your duck.

Last night Alan and I had dinner with some really good friends. We talked about old times, current times, jobs, playtime, and all kinds of things. Interestingly, the conversation moved to the importance of sales to a business.

John shared a story with us about a business stationery business he started many years ago. The business plan was there. The processes were ready. The systems were in place. Everyone was at work. But there was nothing to do. Because there weren't any sales. He started making phone calls. His target was 40 per day. Then he hired some sales people. Each one had a target of 40 calls per day. He measured the number of calls they made (they kept a tally). He got results. There were sales!

Moral of the story: Make that call!

Moral of the story: Persistence pays!

I got an email today from a client I met at a show in July 2007. She wants to order 3 boxes of Strawberry Rhubarb tealights and the Snowflake Pair. She's willing to pay the postage. I've looked up that show on the system and I'm about to stop writing this article and call each person who went to that show. I'm going to let them know that I'm putting in an order and that it will be delivered to Kurrajong before Christmas. I'm going to ask if they would like me to add anything to that order.

I'll let you know how I go in the comments. I bet there's a happy ending. :) 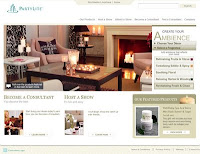 Hello. The new-look website has been launched at partylite.com.au. I couldn't help myself, so I looked up my name and my postcode to see if it found me and, guess what? It did!

The new site is beautiful. I will be promoting it at my shows and in my emails. This launch gives you something else to tell your clients when you make your customer calls.

You might also notice that the website for this blog has been streamlined. The new address is rainbowsandcandles.com. No need for the www at the beginning and no additional blogspot in the address. Now it's easier than ever for you to let potential consultants know about this as a resource if they join.

Clients ask me this. So do Consultants sometimes. Though you might think it would be a convenient way for clients to order, it completely bypasses the most important part of your business... YOU! From the website:

All of Our Business Is Personal. We offer our products only through PartyLite Consultants and catalogues. That means our Hostesses and Guests receive personal service and the opportunity to build a lasting relationship. You certainly never see that in a retail store!

So be the difference. The next time you are at a show, let everyone know that you want to be their candle lady. Tell them that the website is there so they can find you. And set yourself up for success... tell that you will call to make sure they are happy.

Posted by Wendy Lloyd Curley at 11:46 AM No comments:

Resources for answering questions (in order):

My Rainbows and Candles Blog

A Buddy from Your Unit

If you live in Australia and want to become an Independent PartyLite Consultant, talk to your Consultant. If you don't have a Consultant yet... contact me! It's fun, easy, and free!